The key feature of the Fx (Forex) market that makes it different in comparison to other asset classes is the principle of the currency pairs themselves. When you open a position on forex, you start having exposure to a couple of currencies that form a currency pair. Therefore, many beneficial opportunities arise, and one of them is the ability to use one currency’s strength against another’s weakness.

But when you base your decision solely on a single currency pair, it becomes complicated to evaluate its performance and define the strongest currency. For example, let’s take the AUD/USD currency pair (Australian Dollar against the United States Dollar). If it has been strong during the day, has it been because of the strength of the Aussie, or the reason was the weakness of the USD?

A solution to this problem is the Currency Strength Meter – an indicator that is created for the MetaTrader 4 terminal. If you intend to evaluate the strength of various currencies, you can get this MetaTrader tool by clicking the following link.

Current indicator shows which currencies are show strength and which one demonstrates weakness at any particular moment, reflecting it either in a form of lines or in a form of the equalizer. By using our powerful currency strength meter, you will achieve another instrument that will heavily increase your chances to be profitable in trading. 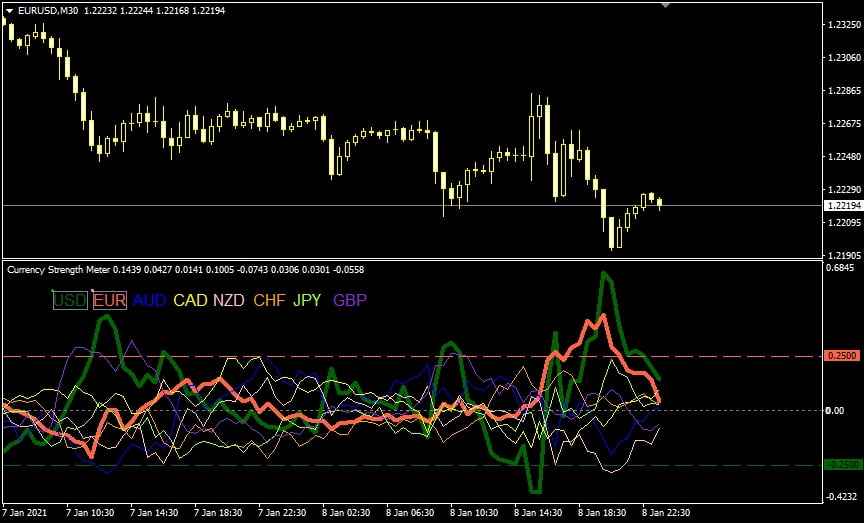 What is the Currency Strength Meter?

In simple terms, a currency strength meter is a visual indicator that shows which currencies are strong at the moment, and which currencies are weak. Currency strength indicator uses the foreign exchange rates of various currency pairs to calculate an aggregated, comparable strength of every single currency. Simplified strength meters may not use any average weighting, while more advanced ones like ours apply their own weightings for more trustable evaluations.

For example, to calculate the strength of the EUR currency, the currency strength meter would take into account the strength of all pairs containing the EUR (e.g. EURUSD, EURJPY, EURGBP, EURCHF, etc.) and then put those values together to define the overall result for the Euro.

One of the examples of comprehensive measures for a certain currency is the USD index, which consists of a wide range of currencies against the US Dollar. The work scheme is the calculation of the strength of the US Dollar by making aggregation of bilateral rates of currency pairs into one number, and afterward, weighting for the included currencies.

The Advantages of Using the Real Currency Strength Meter

There are a number of advantages of using a currency strength indicator that include its usefulness as both long-term and short-term measures, its simplicity, elimination of double exposure of currency pairs, the ability to exclude potentially high-risk trades, and many more.

A professional approach is to use forex strength meters as short-term indicators. They are used as a fast reference to which currencies are performing, and are considered as a snapshot of real-time strength that can be used for immediate decisions to buy, sell, or hold a certain currency pair (or in some cases to confirm signals from any other indicators).

The simplicity of Currency strength meters

One of the main advantages of strength meters is the simplicity of their interpretation. This is certainly important for the new traders that do not have enough experience because it is just needed to have a look at a visual representation and note which of the currencies are performing good or bad. There are no ambiguous signals given by this tool so the evaluation is pretty straightforward. 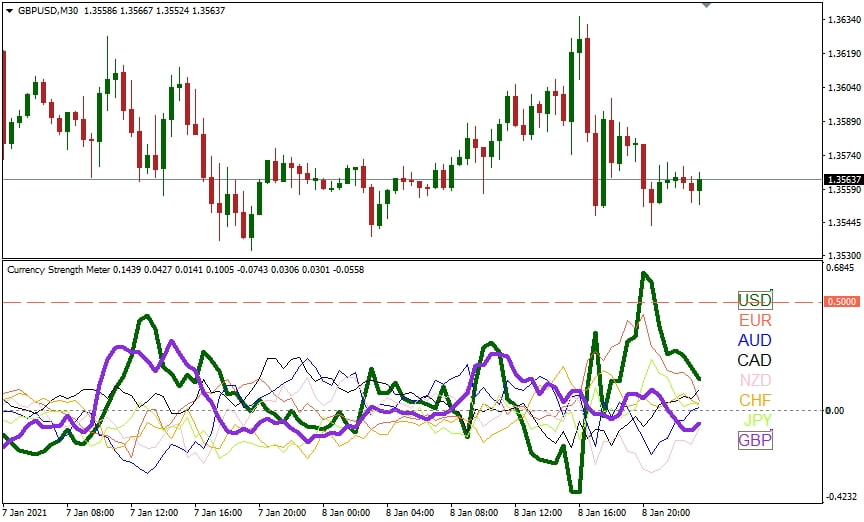 It is a well-known fact that various assets including currencies that have a high correlation with each other move in the same or in a very similar direction. Due to this reason, having multiple positions opened at the same time with currency pairs that are correlated is highly not recommended, because you are in fact doubling the exact same trade. If the market goes against you this will lead to increasing the accepted risk. For example, if there are opened long positions on USDJPY, USDCHF, and short on EURUSD, a trader triples his exposure because these pairs are correlated.

Moreover, these positions bring additional exposure to EUR and CHF, which can be also harmful to a trader, because they are also correlated and therefore the movement against the desired direction can turn into a disaster. With a Currency strength meter, you can see immediately which currencies are moving simultaneously, and that will allow avoiding making such risky trades.

Before taking a trade it is important to overview movements of different currencies, and if they are going in the same direction it is a signal of potentially risky trade. For example, if we are opening a long position on EURJPY and CHFJPY, while both of them are correlated pairs, it is a signal of additional risk for the case if one of the above-mentioned currencies is strong.

Another thing that might occur is when one of the pairs is showing a powerful movement, while the other pair is being in a range that could be treated as a signal to pass such trading opportunities. For example, if the AUD/USD is in a downtrend, while the NZD/USD is in a range, long trades should be avoided on NZD/USD, because it implies a risk of downwards movement due to the potential strength of the USD.

How Does the Forex Currency Strength Indicator Work?

Our realization of the currency strength indicator implies showing performance for the desired currencies in the form of percentages. This approach is intuitive and gives straightforward information about the direction and the power of each currency. To increase usability, the currencies of selected pair that the indicator is set on (e.g. EUR and USD for EURUSD pair) are marked with the squares around them.

The users can adjust both the period of the indicator and the timeframe to display. It might be useful if you want to monitor the exposure either for the long-term to open investment positions or in case of scalping to get more precise entries.

The interpretation of the strength is easy because when the currency is in range, it is moving near zero value while the trending one is significantly above or below it. The indicator is not repainting so you will not get false signals from it.

For a better understanding of the potential of each currency, it is advised to look back for some period of time to see how far they may go and to base the trading decisions accordingly. It is also important because some currencies may have trending behavior while others may have some choppy movements.

Equalizer mode of the indicator

In case if there is no need to monitor the long-term history of changes of the currencies strength, in the indicator there is implemented an Equalizer mode that is showing the real-time power of them. It is displayed in the form of bricks that are also intuitive and give a quick overview of the weak and strong currencies in a range from -5 to 5.

Assets that are moving sideways have a zero value and therefore signal the equilibrium. Such currencies show no interest and it is better to concentrate on those ones that show some momentum.

The zero threshold is shown by a horizontal line that will allow to easily define a basket of currencies that are good for longs and shorts. The equalizer might be displayed both solely or with the conventional lines of the indicator. 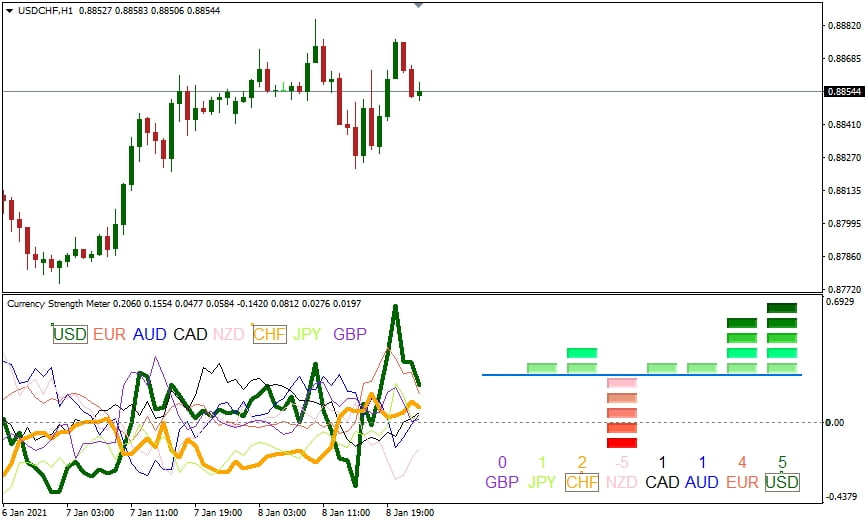 The indicator is feature-rich in terms of adjustments. First of all, you can select the currencies that you want to watch after. While the majority of other strength meters allow monitoring only major fiat currencies like USD, EUR, AUD and others, in our software there is no limitation and you can select also minor and exotic pairs as well as cryptocurrencies.

If there are some pairs that you want to exclude from the calculation, it is also possible to be done in the settings. By default, there are taken into account the pairs that are selected in the MarketWatch of the MetaTrader 4 terminal but the evaluation of all the pairs that are offered by the broker could be turned on also.

For easier identification of the strong and weak currencies, there are implemented the thresholds that could be set up in percentages and that are displayed in the indicator window in the form of the dashed lines. These levels are also used for Mobile or Desktop alerts when some currency is getting strong or weak.

All the lines and the labels of the currency strength meter are adjustable in terms of color so you can easily change the default colors from the indicator settings. The positioning of labels is totally adjustable so you can locate it vertically, horizontally, define the corner of the chart for displaying, font size and change other inputs as desired. 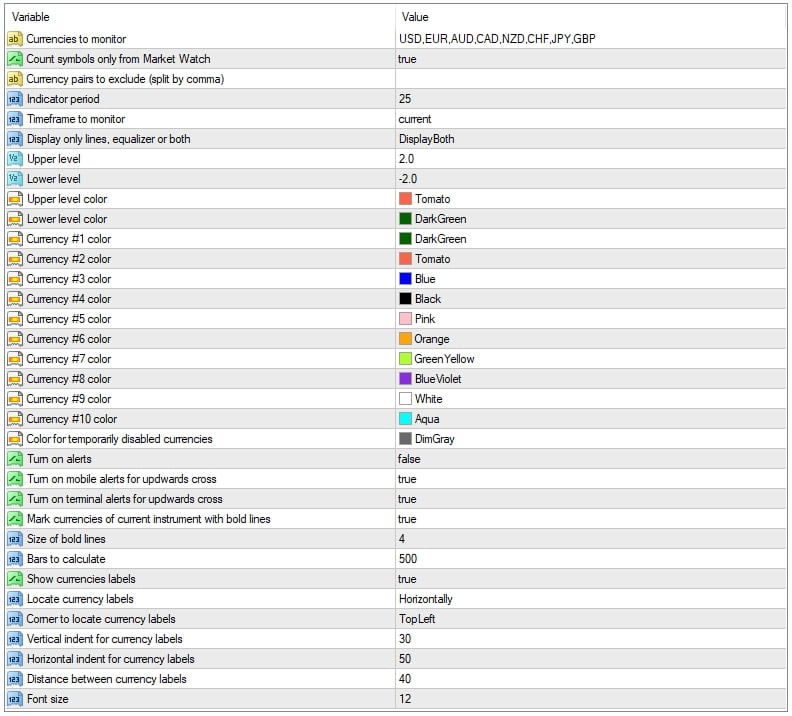 How to Use the Currency Strength Meter

As mentioned before, the usability of the indicator is maximized so even novice traders can start beneficial trading with it. At first, it is required to define the currencies and the thresholds where you want to enter.

Secondly, adjust the period and timeframe according to your trading strategy and style, depending on the duration of the trades that you usually take. The higher timeframes and periods mean the longer holding of trades and the arbitrary is applicable for short-term scalping trades.

Watch after the crosses of the predefined threshold that will be also alerted if the setting is turned on. 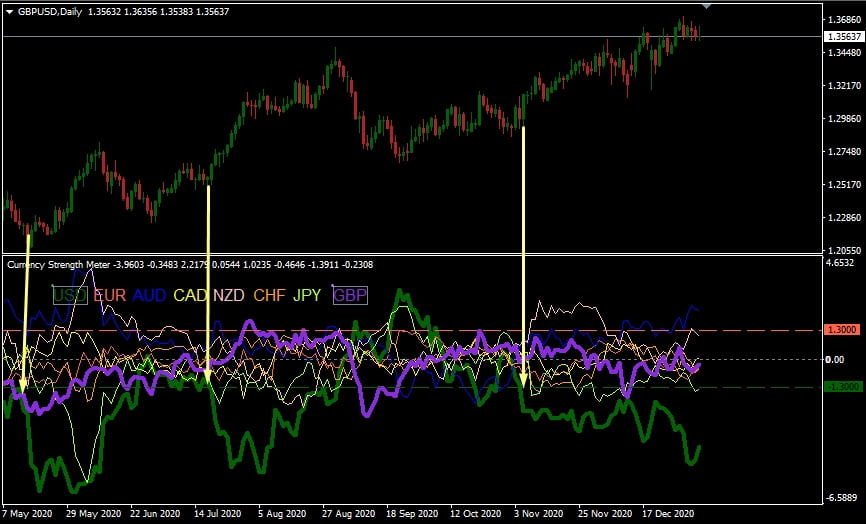 On the chart above you can see the clear signals of USD weakening while other currencies including GBP are above zero most of the time. When the USD line (green color by default) crosses the threshold downwards it means that it is a good sign to find some trades to sell USD and to buy some stronger currency.

Yellow arrows show the potential entries that have led to nice trading opportunities that came out with decent profits. It is up to the trading approach how long to hold the trade but the most common one is to keep the position until some signs of reversal appear.

When the currency is staying beyond the thresholds it means that the trend is staying and the setup is still in play. The indicator is very useful also because you can monitor both currencies and can exit perfectly when at least one of them starting to show some pausing behavior.

This approach is of course not the only one and traders might find their own patterns in Currency Strength Meter that might be useful and profitable.