The indicator became popular because this swap zones extension gives another type of quality signals and also provides traders with extra confirmations while making a trading decision.

Why do Swap zones work?

The basic concept is to remove the zone from the chart when it is broken by price. Though as far as Supply and Demand idea is based on the principle of Support and Resistance, it is a well-known fact that former support areas become resistances when price reverses to them from the opposite side.

Some professional traders even consider swap zones more powerful in comparison to conventional supply and demand areas because fewer people using them which increase the trades probability because the crowd can not win – it is a famous proverb.

Eventually, a demand level is formed when the price comes to an area, consolidating afterwards and finally rallies, thus identifying the area where there is demand.

The difference is that when the extreme (low in the case of the Demand zone) is broken, the zone should not be removed from the chart. We keep it and wait for the reversal to occur and to enter a trade in the direction of the breakout.

The direction of the breakout (i.e. a trend) is another benefit of the swap zones in comparison to conventional S/D zones because in this case, you are staying with the overall asset movement and not trying to catch a falling knife by entering the trades in the zones of Demand.

A supply zone is simply the opposite. They are formed when the price goes up and then forms a base, consolidates and eventually starts to drop. The supply swap zones are especially useful for people who like swing trading and investing in equity markets.

It’s a known fact that equity markets tend to grow up on a long time distance. Therefore when some supply zone is broken and a reversal to that zone occurs, it is a very good area to get in to catch an upward movement. 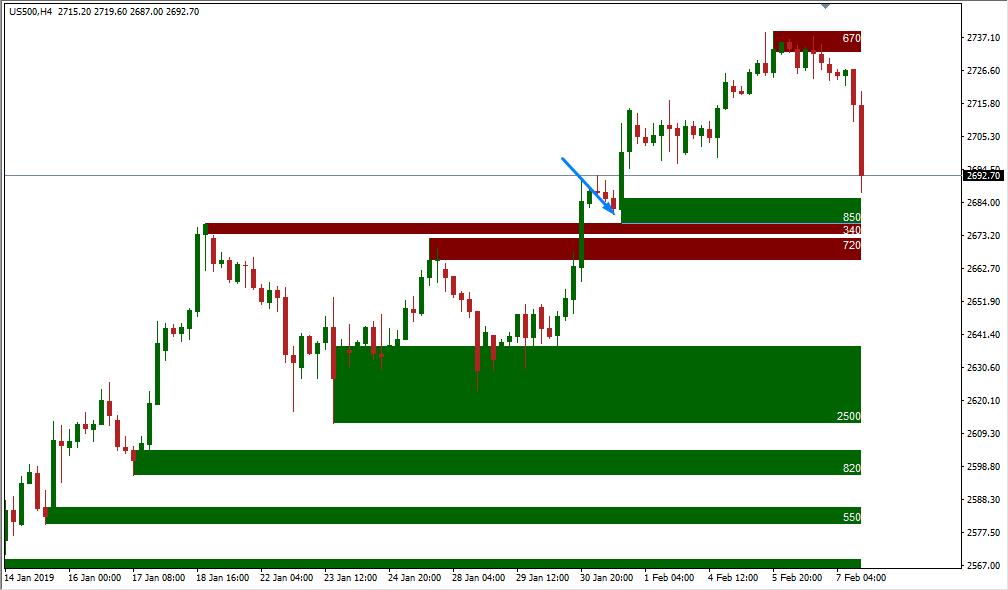 Figure 1. US500 chart with Supply and Demand zones

You can see that the indicator plots these levels automatically. If you look at the middle of the chart where the blue arrow is placed, price broke the tiny supply zone and then retested it pip-to-pip. The strong rebound followed this retest and gave a very good risk/reward ratio which is very important according to risk management.

Also when the price went away after the swap zone touch, the demand zone was formed with an intersection with it that is another strong confirmation. Such price action activities give high probability signals and add a certain level of confidence when entering the trades.

Supply and demand zones as well as swap zones have their own terms of strength and weakness. That is also a good reason for using it by novice traders because there is no misleading or double interpretation. The strongest swap supply or demand zone is when the price of a particular asset visits the area for the first time after the level has been broken. 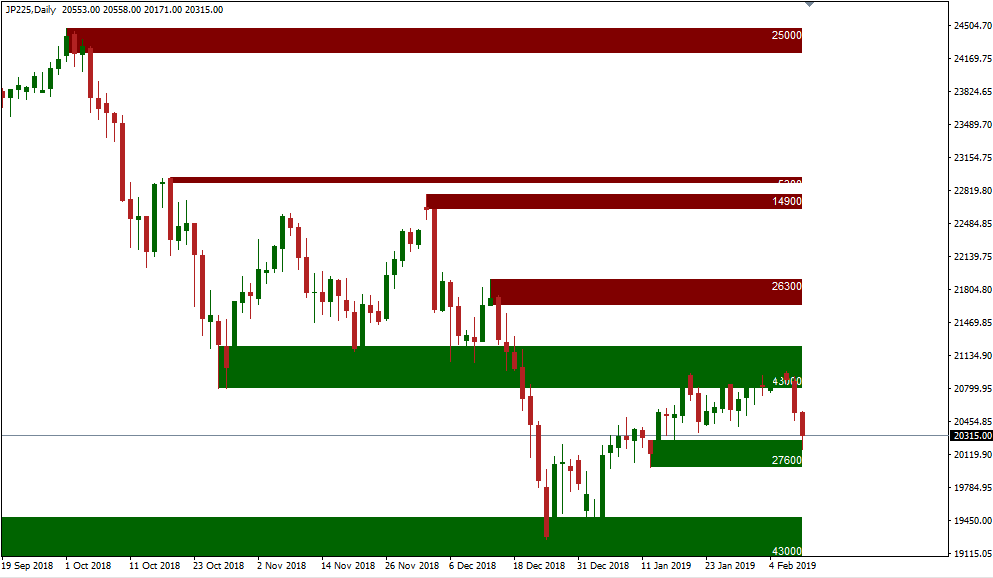 As seen in the middle of the Figure 2 chart, the swap demand zone was touched multiple times and therefore it could not be considered as fresh. Non-fresh zones are more dangerous for entries and should be taken into account with caution.

A moderate zone is when the price retests the Swap S/D area for a second time. It just slightly weakens the strength of the S/D zones and still could be used for rebound trades. In Figure 2 chart all the zones beside this Demand zone in the middle are considered fresh because have not been visited by price.

Moderate (weak) zones should be used only when you know what to do and have experience with them. People that are sometimes claiming that conventional Supply and Demand or Swap zones do not work usually use all the zones (including weak) and decrease their probability with their own hands. But for higher chances, only fresh swap S/D zones should be chosen.

Traders usually ask this question to realize which types of zones have higher probability and risk/reward ratios. In common terms, it is always better to get several confirmations for the trade entry. The same is applicable to the S/D and Swap zones.

As soon as Swap zones are some sort of an extension to the conventional Supply and Demand areas it is better not to anticipate them but to combine. As shown on Figure 1 chart there sometimes appear very nice signals when price revisits the Swap zone and afterwards forms a fresh Supply or Demand zone. Such signals are very powerful due to double confirmation of the entry.

The key point is to grab as many of such supporting conditions for the trade as possible and increase the chances for the potential trade. Among such factors are the multitimeframe zones.

One of the most confident criteria to consider zone as strong is multitimeframeness. It gives traders an additional signal that the area is definitely powerful due to the presence of the zone from a higher timeframe. 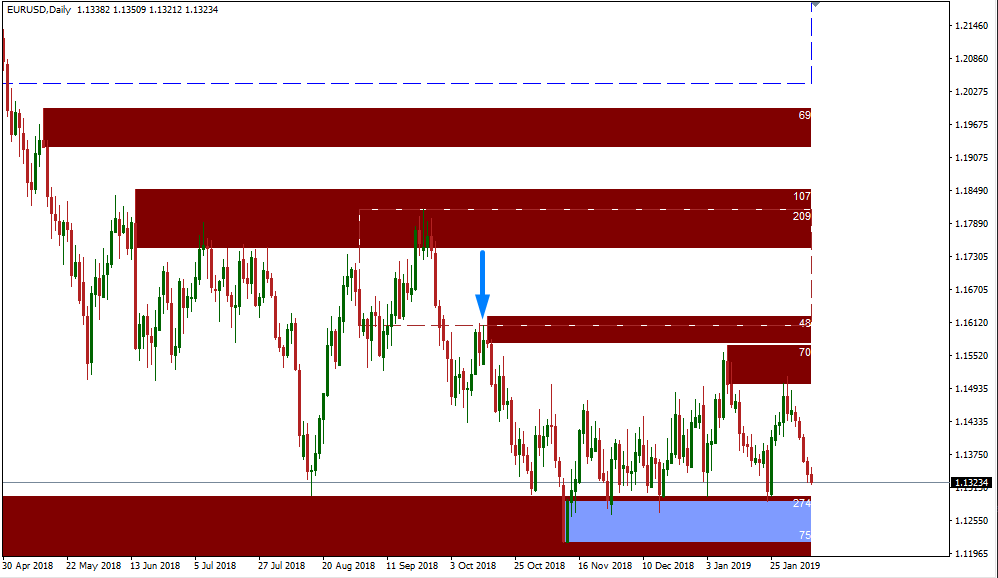 Figure 3. EURUSD chart with Supply and Demand zones on Monthly and Daily timeframes

When several Supply or Demand zones on different timeframes (for example, on Daily and Weekly on Figure 3 chart) are located near each other – it is an extra signal about the potentially higher chance for price to bounce from such area.

As noted on the chart with a blue arrow, the price touched the dashed Supply zone from the higher timeframe and later on formed a Supply zone on the lower timeframe. That was a very good signal that gave a strong movement from 1.15 to the opposite zone at 1.13.

The Swap zones indicator has a big number of settings that allow to customize it in many ways. 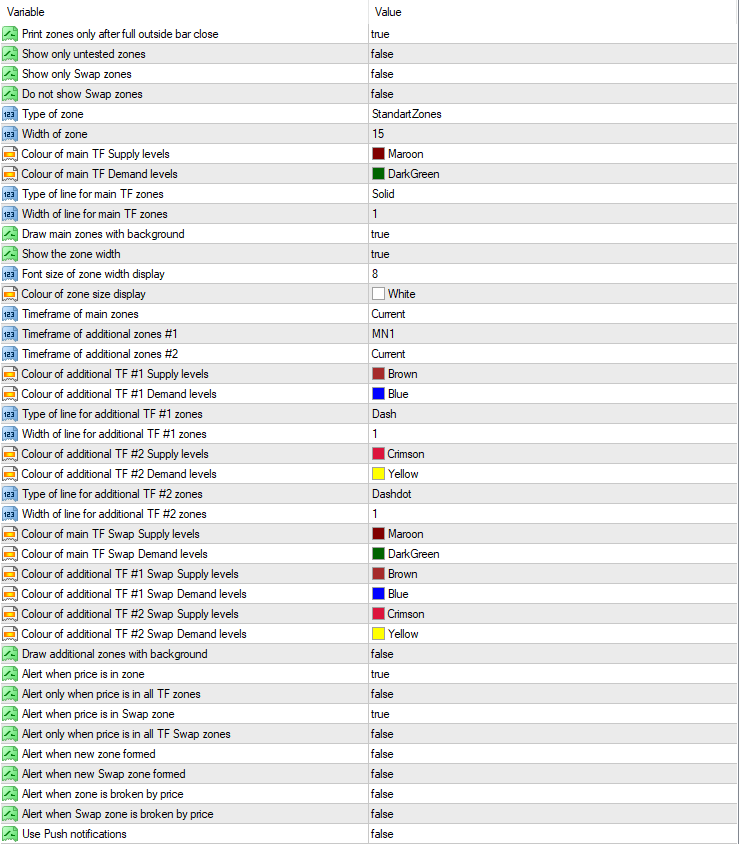 All the inputs of Supply and Demand Multi Timeframe indicator with Swap zones could be divided into several groups:

It is fairly difficult to monitor several timeframes on several instruments that is why an Indicator is used to automatically draw zones, remove the expired zones on the desired timeframes and send alerts when the price visits a couple of zones at once.

Moreover, due to the variability of strategies that are using Supply and Demand with Swap zones as a base, there could be added more alerts that cover the wanted trading setup.