When it comes to trading, every single person comes to a point when he has to choose an approach for placing money into the market. At first, the question is how much time could be shared for trading itself, pre-market analysis, trading activity overview, and other important aspects.

Trading styles like scalping require a lot of time and could be fairly considered as a job for which you share the biggest part of your day. Investing is an opposite approach when you share way less time for the trading routine though you get way less income if compared to other trading styles. If you want to choose something average with decent potential gains and little time in front of the monitor then day trading is the best approach to stick with.

What is day trading?

Day trading is a practice of buying and selling an asset within one trading day that occurs on forex or stock markets. Day traders normally use high leverage and try to get income out of directional small price movements.

These movements usually occur due to scheduled announcements like economic statistics, corporate earnings in the case of stocks, or interest rates in the case of currencies. Markets aggressively move when some outstanding news is out and expectations for this news have not been met. It is a common practiсe that sudden, significant moves lead to big profits for day traders.

Overall, the concept of day trading has increased in terms of popularity over the last 10 years. One of the main reasons is technological progress– fast broadband, PC in every family, and mobile phones with access to the internet that allows getting all the market information at fingertips. This has become a rationale for more people being involved in the forex, stocks, and other markets with a day trading approach.

When day trading is chosen as a trading style, a broker that executes the trades on the market should be chosen. Please have a look at our brokers reviews to get complex overviews about the brokerage companies that offer its services. Choosing a broker is an important decision so here are some key points to look at:

This strategy usually acts with the assets that have some news bias behind them and move either up or down since the beginning of the trading session. A trader has to define the strongest up and down movers of the day and to enter in the same direction. You simply keep holding the opened position until some signs of reversal appear.

If a momentum strategy is used for Forex trading, for easier identification of strongest and weakest currencies a Currency Strength Meter could be used.  Here is an example of how momentum analysis could look like to define the best and worst performers among the currencies. 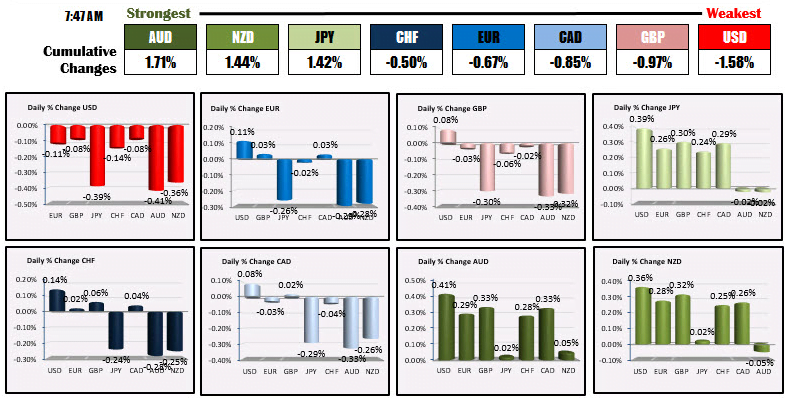 Breakout is a strategy type when price breaks a specified horizontal level on a chart, especially with increased volume. The trader should enter into a long position after the asset breaks up the resistance level. Vice versa, a short position should be opened once the instrument breaks down the support. These levels are also named Supply and Demand and on TradingKit.net there is offered a Supply and Demand indicator with multi-timeframe feature to automate the process of such levels definition.

An important notice is that there might be true and false breakouts. False breakout usually just spike a level and return beyond the broken level. True breakouts happen with outstanding volumes and in a sharp/fast way.

It is as well required to find the proper instrument for this strategy because each instrument has a various probability for a breakout to work. Also, more hits of this support are resistance areas add importance and value that may add additional impulse for the zone when broken.

One of the most popular strategies is price action. Usually, under price action, it is understood the behavior of price. It is mainly described as the study of the actions of all buyers and sellers that are actively involved in a given market. It’s particularly popular in the forex market and is widely mentioned in books and on various forums.

The most commonly used price action activity is a candlestick because it gives the trader certainly useful information such as the opening and closing prices of an asset and the high and low prices in a specified time frame. Combinations of different candles form specific patterns that have been used for many years by many traders.

Here are some examples with pattern names that may shed some light on how it looks like and what to look for on the chart. 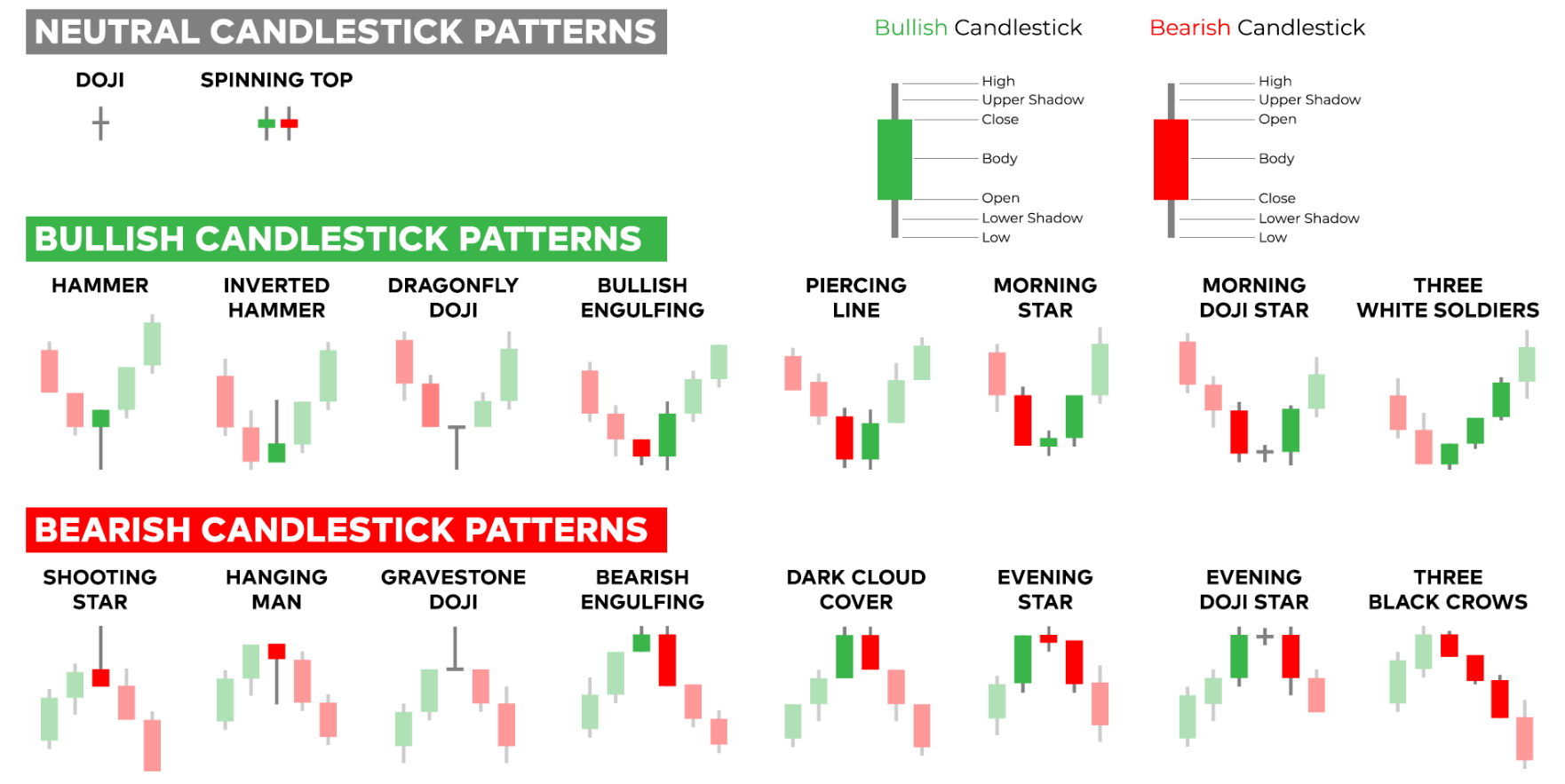 Reversals strategy also known as a mean reversion strategy is used by traders all over the world because of its simplicity.

The strategy’s basic logic is to trade against the trend. The key point is to accurately identify possible pullbacks point and as well to predict their strength. There are various approaches to how to do it like Depth of Market analysis, chart patterns, news, and so on. Here is an example of how it could be done using chart patterns.

Below is the list of most often used chart patterns that may help to identify the reversal points.

If somebody wants to become a professional day trader and trade for a living, he has to obtain several important character features.

A lot of day traders lose money not because they do not have a trading strategy, but because they fail to follow it. As said, “Keep It Simple Stupid”. Blindly follow the plan.

If a series of losses occur, it is not a reason to start making trades out of plan. Sticking to the strategy even in volatile times is a key point that diverges a profitable trader from a losing one.

Individuals can start to day trade without any understanding of the market often lose money. As mentioned in our trading strategies article, technical analysis and fundamental analysis are good points to be proficient at. Chart reading is also an important skill for a day trader to succeed.

Only having a solid base behind may increase the chance to start successful day trading because this is what gives an edge over those who are trading blindly.

It is close to knowledge but differs a little bit. Even knowledge does not replace having expertise in real market conditions and experience about how to behave in various situations.

Many traders know the core mechanics of markets but very few faced with such enormous market moves on CHF currency forced by the rates news by the Swiss Central Bank. Or the elections in the USA that impact all the asset types and lead to unpredicted moves.

Day trading nowadays is really a controversial trading style but still, it can be a  way to earn money. Both institutional and individual day traders play a vital role in the market because they add liquidity and make the markets efficient. Day trading remains popular among inexperienced traders that share a lot of their time to succeed.

The professional day traders spend the majority of their day trading activity because for them it is considered a real job. That is why if you want to compete with these kinds of traders you have to find some way to share as much time as possible for it.

You also need to define the best suitable strategy for your personality, as well as to define maximum acceptable risks and manage these risks either manually or with some software like Risk Manager from TradingKit.net.  Discipline and control over the emotions are essential for successful day trading.

Lastly, being patient is vital because it is very doubtful that profitable trading may begin from scratch that is why some time should pass to gain certain expertise and experience in managing positions, combining analysis, and strict following the plan.